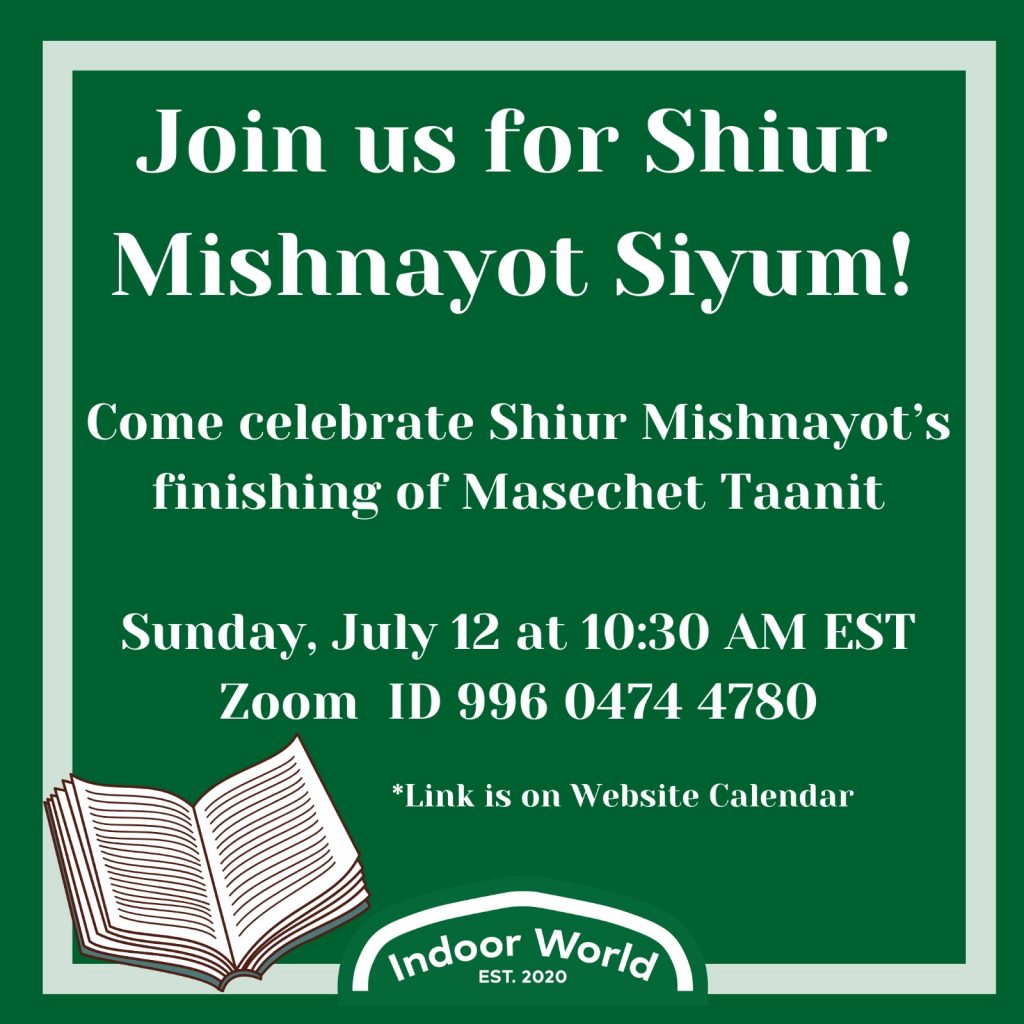 Shiur Mishnayot is Doing a Siyum of Masechet Taanit 10:30 Aa EST on Sunday!!!

Are you finishing ALL of masechet Taanit with us? Fill out this form by SHABBAT so we can send invites to your parents and send you the Hadran!
Interested in helping explain the last mishnah or what Masechet Taanit was overall during the siyum? Email sofiayfreudenstein@gmail.com.
Want to catch up for the siyum? Access Masechet Taanit here!

Join us every day at 8:30am for hot chocolate and Mishnayot! Follow along with our limmud – learning – in Masechet Ta’anit by answering the questions at the end of the shi’ur and you can score points! Click here for the live ZOOM.

Questions of the day:

6/30:
(4) What would incite a fast on the seventeenth of Cheshvan?
(5) What is the difference between the fasts introduced in this and the previous Mishna?
(6) When is the fasting stopped if rain never falls?

7/1:
(7) Which source from Tanach tells us that rain in the summer is a bad sign?

PEREK BET:
(1) What seems to be the true purpose of a public fast day, according to the Mishnah?
(2) What are the necessary qualities for a Chazan on a fast day?

7/2:
Mishna 3) The 6 berachot added on the special fast days are mostly new to us and unique. Which ones are familiar to us from our davening and when do we say them?

Mishna 4a) What is the concluding bracha of bracha #5 for the 6 special brachot added on a fast day?
Mishna 4b) *Challenge* Each of the 6 brachot have a concluding phrase מי שענה את… when do we say a poem in our davening based on this phrase?

7/3:
Mishnah 5) What did the Shaliach Tzibur not say that Rabbi Chalafta and Rabbi Chananya Ben Tradyon expected him to say?
Mishnah 6) Who is more strict, the Chachamim or Rabbi Yehoshua? Mishnah 7) Why may the guards cut their hair on Thursday?

7/5:
Mishnah 8) are we allowed to fast the day before a happy day ( which we are not allowed to fast on) according to chachamim? And how about according to rabbi yose?
Mishnah 9) why do we not start a set of fasts on a Thursday? Explain.
Mishnah 10) what did the rabbis decree should be done on a Tisha ba’av that falls on a Friday?

7/6:
PEREK GIMMEL Mishnah 1) What are the 2 signs of drought given in the mishna?
Mishnah 2) What is the Halakha if rain falls for the crops and trees but does not fill the cisterns?
Mishnah 3) What does this mishna teach us about the principle of ערבות, social responsibility?

Color War! 7/7:
Mishnah 4) what constituted a plague in a city according to this mishnah?
Mishnah 5) name three of the plagues that would cause neighboring cities to blow the shofar and fast
Mishnah 6) how much grain dries from the shidafon (plague of drying of crops) in the Mishnah?

7/8:
Mishnah 7) Can we blow a shofar on shabbat in times of crisis? Why?
Mishnah 8) We all learnt the story of Honi Hameagel earlier in tochnit, but what halachic point does the mishnah attempt to prove by bringing his story?
Mishnah 9) What do we do if it rains on a fast day? According to Chachamim? according to Rabbi Eliezer?

PEREK DALED
Mishnah 1) On what occasions would a Kohen say Birkat Kohanim 4 times a day?

7/9
Mishnah 2) Why were the Ma’amadot instituted?
Mishnah 3)Which section of the Torah did they read during the Ma’amadot?
Mishnah 4)Who changes their mind in this mishnah?

7/10
Mishnah 5) What are the days that the family of Parosh ben Yehuda brought wood for the wood-offering in the beis hamikdash (hint- there are two)?
Mishnah 6) What are 3 of the travesties that occurred on the seventeenth of tevet?
Mishnah 7) What is the first sign of mourning that the mishna says we should do?

Registration for summer 2023 is now closed. There are a few select spots remaining.
Please contact Randi Mashmoor at:

About the Chanukah Raffle

It is an incredible feeling to reconnect with everyone once again at the beginning of our 2021 camp season.

We are writing to you today, first and foremost, to express tremendous gratitude.

Hakarat HaTov, literally “recognizing the good”, is an important and fundamental principle in our community. We, at Camp Stone, want to express our Hakarat HaTov to everyone receiving this email for your unwavering support, especially this past summer. Whether you provided financial assistance through your donated tuition dollars, participated in Indoor World, or connected with the Camp Stone community in other ways, together we had an incredibly successful, albeit different, summer experience.

There is no substitute for being in Sugar Grove, Pennsylvania, and this summer, B’ezrat Hashem, we will be back at Camp Stone, in person, in full force.

To achieve that goal, we must continue to ensure the financial success of our home away from home that we all know and love so deeply. The logo on top, featuring the slogan “Stone. Forever.” also features a Ner Tamid, an “eternal flame.” The year 1969, etched into the logo, is the year camp was founded. Symbolically, the overall image represents the idea that Camp Stone began many years ago and must endure forever, always burning brightly, and always an integral part of our collective conscience.

On that note, we are excited to announce that our annual Chanukah Campaign will be a raffle taking place over all 8 nights of Chanukah with prizes for both campers and parents/alumni!!

Please go back to the web page  to purchase raffle tickets and help us achieve 100% participation from our entire camp community!

Looking forward to being in touch with all of you in the near future.